Intro: Originally, hunters were designed to be played as a ranged class and the legitimacy of a hunter in the melee role was rarely considered. However, with a game that has been dissected for over a decade this dated notion has now been disregarded. It's crucial to remember your melee journey demands a large amount of effort for players to recognise. Painting yourself in the most positive light possible will have lasting results. See Video to learn more. 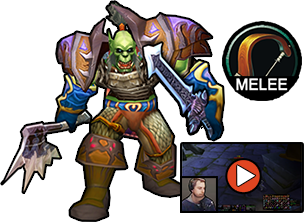 Caperfin's Melee Hunter​
Being attentive and well mannered will have positive ripple effects later on. You want as much working for you as possible. If done properly, you’ll be known as not only a skilled Hunter but a proficient Melee Hunter who goes above and beyond expectations.


Pet​
Video: Melee Hunter - What Pet? - Youtube
A pet contributes a decent amount to our general damage. But, if you don’t cater to the survival of a pet it will be a detriment to your DPS. Therefore, it’s not only advised to move out of the “giant fire” on the ground but also manage the position of a pet. Those who master this notion, should consider investing into buffs for their pet. In terms of damage, the pet family: "Cat", come in first place but more specifically Broken Tooth who has a unique 1.0 second attack speed.

Video: Melee Hunter - Which Professions?
Engineering for: Gnomish Battle Chicken, Goblin Sapper Charge, Goblin Jumper Cables XL among many other items. As a second profession, pick an easy or high gold generating one, this helps you buy powerful potions.

Video: Melee Hunter - Buffs
There's a max of 32 Buffs, avoid nearing the max as it may result in Buffs getting mistakenly removed, the addon: Buff Cap Tracker helps. Use Buff Cap Calc to see what Buffs stack. A max of 16 Debuffs can be on a mob, Faerie Fire and other armor reducing debuffs are the most influential.


Phantom of the Wing Clip​
The basic spell Wing Clip performs a “Phantom Strike”, which causes a melee swing but no actual damage is dealt but it will still trigger effects that require a melee swing to activate, ex: Windfury Totem among others.

Enchants are tailored the same way as the gearing process. See the list of Enchants to learn more.