Thread title is pretty self explanatory, post a picture of your old UI.

v3.0 - My first few attempts with modding my UI were terrible, and ugly, and I dare not show them here. This is the one I used for the longest amount of time, fully configured Discord Action Bars and Discord Unit Frames. This UI was based on Beckon's UI from his Naxxrammas videos. There is a bar above my player frame that will only display spells when they're on cooldown/in range. Everything else is hidden and keybound (all of which I still remember, because most of them carried over to the subsequent expansions.

Damn nice with the chat bar + raid bars! i've havent seen anyone placing them like that!

This is nice, im gonna logon and create my UI for Kronos launch!

You sure it was Quartz? The addon release in TBC...and I can't seem to find a vanilla version.
E

Struckd said:
You sure it was Quartz? The addon release in TBC...and I can't seem to find a vanilla version.
Click to expand...
Elkano Cast bar

Struckd said:
You sure it was Quartz? The addon release in TBC...and I can't seem to find a vanilla version.
Click to expand...
I think there was an early version of it released in Vanilla, but again, it's been 10 years, so I could be, and probably am, wrong about that.

Etech said:
Elkano Cast bar
Click to expand...
This, this was it, thank you.
D

I do like your attempt at minimalism Gilthresa. Don't think many have relevant images from so long ago though.
I do wish I still had screenshots of my UI from Classic. I take very few and even those, I cull periodically. Think I have ~40ish screenshots left in total. Earliest proper UI screenshot I can do is 2010. It is edited with so many details because I used it in my application to my subsequent guild. I kept this one for nostalgia purposes, we disbanded that day (we did get a World Top 20 on Glory of the Icecrown Raider during this raid though sigh; we just did not have enough to keep the same rhythm in 25 anymore; same old story).
Anyway, I always hated using addons, so I employed as few as possible.
So, MoveAnything.
The buffs/debuffs I was tracking through TellMeWhen. Sadly, it was only created in late TBC. I was one of the few hardcore hunters to adopt it early. It remained low-profile for years, overshadowed by PowerAuras and other crap.
You can see I was tracking my trinkets' internal cooldowns, but for that I customized a special addon and I forgot its name.
And, of course, there's the "boss-timers" addon and the DPS and Threat meters.
Those are it really, never employed more. Ever. I have no relevant ones for Arena/RBGs. But the one below is right after an Arena session - on the last day I played retail (hence the screenshot). As you can see, some abilities are changed around, my pets are keybound for handy dismissal, but that's about it.
MoveAnything, and above my chat window would appear either Gladius or BattlegroundTargets, depending on whether I was in Arena or RBGs.
Aside from the ones listed or very, very similar ones, nothing else genuinely helps you much, the macros are the ones that make the difference, interface wise. This was my main raiding UI back in original wow. Up until the end of BWL. When new mods came out that you could click them to cast a spell on someone. Rather then they were informational only. I changed it a bit to be more streamline, but still the same idea overall though.

Set up so i can drag out the important classes and the group that i need to watch. My favorite ranks of spells up on the board ready to go and the emergency monitor to have an overview of the worst people.

I am and always will be a clicker. Keyboard shortcuts were to select the right person then i click on the spell i need. I am sure i could have been quicker the other way but that's just how i learnt.

Also being an Aussie the 1131ms latency is normal. Yet we still were able to be up there with the best in the world raiding. Just think what we could do with a quicker connection This is mine currently. I'm leveling a toon on ED just so I know where to go for all the quests and such so I can level quickly once Kronos releases lol

whats the name of that battle shout timer?

Lomance said:
whats the name of that battle shout timer?
Click to expand...
I'm pretty sure that's Elkano's Buff Bar, which replaces original buff icons and can be moved around.

WhistlerWCT said:
I'm pretty sure that's Elkano's Buff Bar, which replaces original buff icons and can be moved around.
Click to expand...
It is.
C

This is my updated UI. This thread got me interested to make it look a lot cleaner and I think I finally made it work. If you want to know what I use, just shoot me a quick PM. I like an open ui and i like everything to look clean and sorta normal and stuffs so this is what i go with 99% of the time when i raid though i have a few more things on the screen.
F

here's mine, been screwing around on feenix trying to get it looking good and ready for release.

here's mine, been screwing around on feenix trying to get it looking good and ready for release.
Click to expand...
I dig that.

Now that the server is up, post what your UI looks like as you start on Kronos! 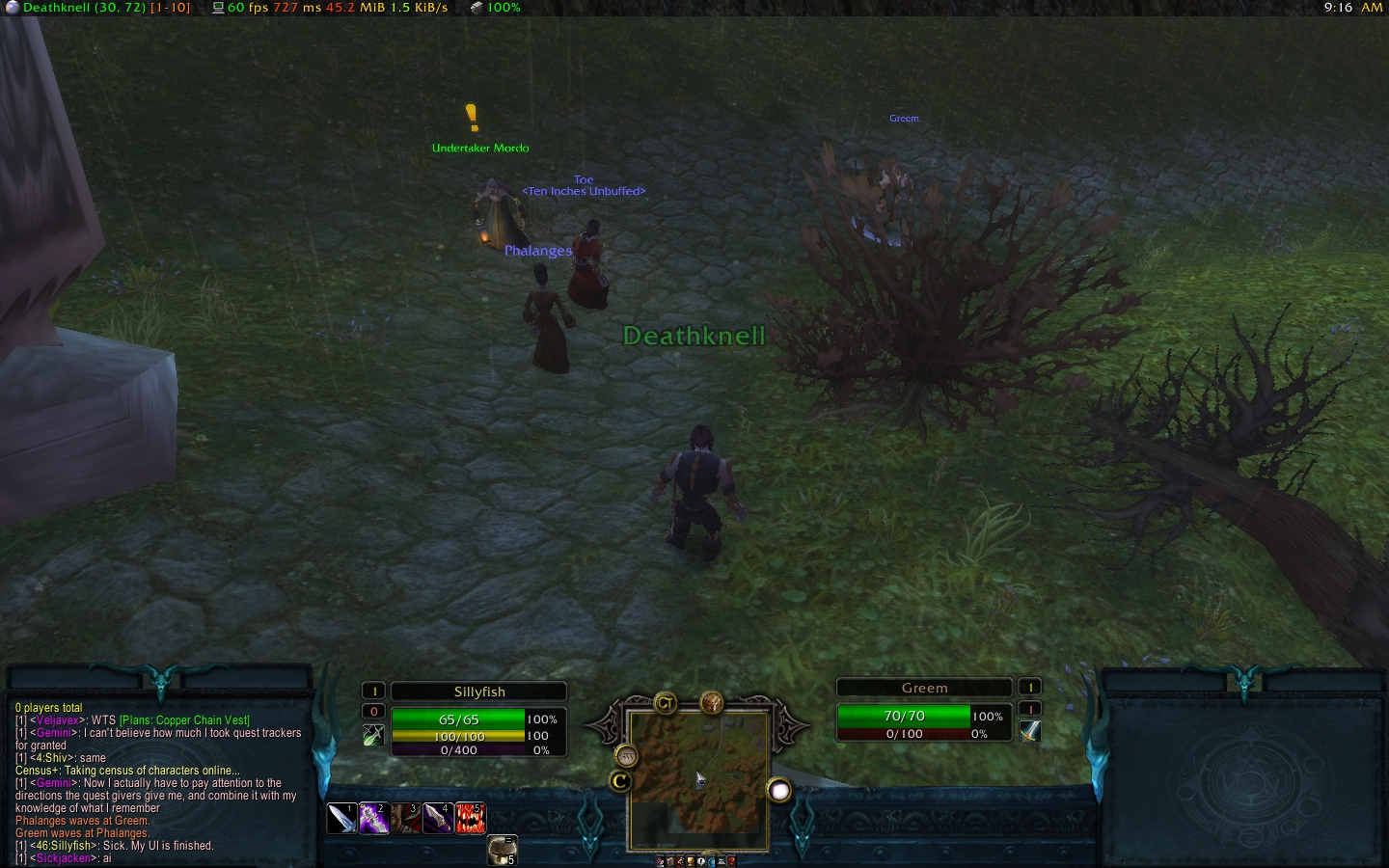 Sillyfish said:
Now that the server is up, post what your UI looks like as you start on Kronos!
Click to expand...
Great idea, however may I recommend that everyone also list what addons you are using to create these beautiful UI's? I've noticed that most times no one ever says what they are using and it would be great to know so that others can also creat it rather than having to ask each individual poster

Well it wouldn't really be worth it in my case, since I use custom art that I've modified myself in Photoshop.

However, other addons I use are

Discord Art
Bartender
Xperl
Fubar
SimpleMinimap
Prat
Onebag
MikScrollingBattleText <--- Took the only working 1.12 version of this and translated it from French to English. Here's the link to my mega storage account. https://mega.co.nz/#!XtN2Aa4L!1SNixuaX6B2o68r-RkPG1z4zzUE2NiBslE6oV1kCQvk
EavesDrop Nice guys. I have always enjoyed minimalist/simplistic UI's for how clean they are. I definitely think I'd use something like that if I wasn't so fond of custom art panels.
D Here is mine, Addons used are: