This is Strongbad coming to you again with another role playing story to satiate all those who have been waiting so long for Part 4 of PVP Adventures on the High Seas, which I promise is coming soon. Anyways, there I was again in the Salty Sailor, doing what I do best according to the rest of Azeroth, getting drunk as a skunk. The barkeep was about to yell last call and I knew I was going to have to head back to Orgrimmar soon enough if I wanted more alcohol. So when last call was finally yelled out, I decided to ask the Barkeep where I might be able to find more of the fine ale I had been drinking all night. He responded very scared saying that it would be impossible and knowing that it would piss me off not being able to get more ale like that, he quickly said, go to the other taverns in the Eastern Kingdoms! I knew the barkeep in Orgrimmar served a similar beverage but I wanted a steady supply no matter where I was in the Eastern Kingdoms. To do so however, I would have to get past some scrub Alliance bouncers to get access to what I wanted without a doubt. He informed me that the alcohol I was drinking was only made by the Dwarves, and they only dealt it to very specific taverns and there were only two Barkeepers who served to the Horde. Deciding it would be best to head out in the morning and not mount drunk, I got a room in the Inn and rested my head for the night with dreams of Dwarven ale in my head. I had the worst hangover waking up the next morning and my ability to mount and ride was at its worse. Took me forever to ride north and reach the first Tavern the Salty Sailor Barkeep had mentioned. Just north of Stranglethorn Vale led me to the Alliance held territory of Duskwood. There was a tavern in a town called Darkshire that I would start my crawl for ale in. After I finally stopped swerving, the ride got a little bit easier and I eventually made it to the town. Finding the tavern was easy enough, all buildings look the same for Alliance, bunch of weirdos. Why don't yall use the terrain more to build your buildings? Don't you think its a little dumb to make all your buildings the same in terms of defensive strategy against the Horde? If I know every building's shape I am definitely going to know where your leaders are, and then its game over. #LearnMilitaryStrategy Anyways, I was able to find enough to satiate my thirst for the time being and cure my hangover by getting a buzz again. But the barkeep still couldn't help me with finding a steady supply of dwarven ale. He informed me however that the next tavern to check for a good source of alcohol was in a town just across the border of Duskwood in Redridge Mountains. I thanked him and waved good bye as I mounted again. Straight swerving again, doing me, one hand on the mount, I made my way to the tavern at Lakeshire. Upon my arrival, I found there was a huge supply of dwarven ale, but this still wasn't the source or the barkeep I needed to talk to about having a constant supply of the alcohol everytime I was in the Eastern Kingdoms. The drunks in this tavern were really awesome. They went harder than I did. The dwarfes were passed out as fuck on the bar floor. #YOLO. Anyways, the bartender told me where to head next to keep working my way up the supply chain. And that was to head west to a little bar I knew quite well. The Lion's Pride Tavern in Goldshire had already been my home for secret visits in the past. It was a great brothel and had many simple pleasures all races of Azeroth could enjoy. I tipped the bartender for the information and headed out the door. I may have went a little too hard on their backstock of ale. The ride was nothing short of screwy to Goldshire. But that's how I do things, ain't no one around here going to tell me I can't mount drunk, fuck the Stormwind Popo. Upon arrival, I made my normal rounds seeing many familar faces. The ale was good, but not plentiful, it was obvious this was just another dead end on my adventure. He did provide the necessary information I needed. So after I got my fill of Horo's mother, the night elf Alessiia, and some great dome from Nedstark, I took the information given to me by the barkeep and headed even further north in to Alliance territory. 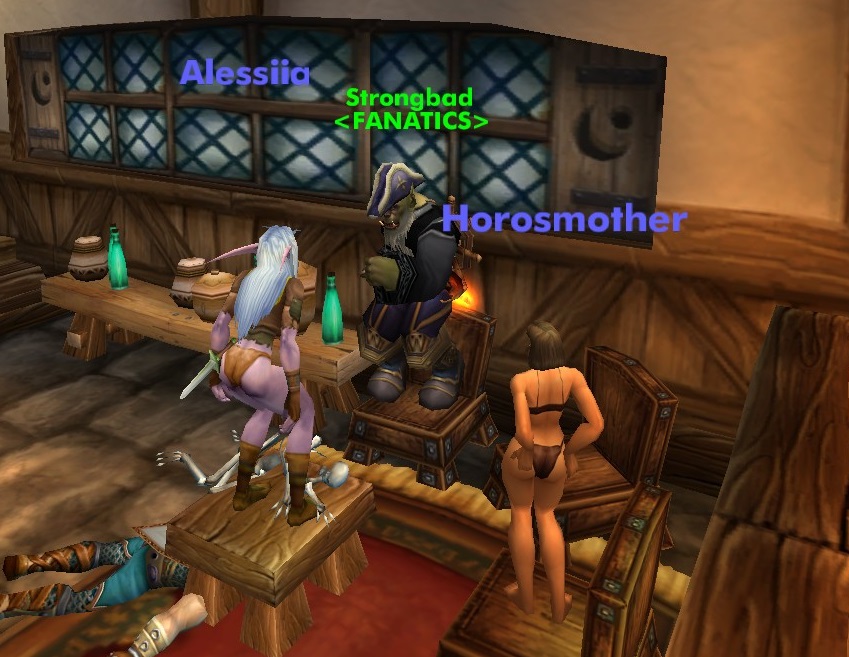 It was easy enough to reach my next destination. With my home in Kargath, I simply rode north in to Loch Modan. The dwarves had been expecting me. The bouncers didn't even bother checking my credentials or pass port. The barkeep was very helpful, I think I was finally getting somewhere on my quest. Their supply and prices were unmatched! I went way overboard and passed out hard. The dwarves were nice enough to give me a room to let my drunk ass sleep. It was much needed after the journey I had been taking around the Eastern Kingdoms. The next morning, the barkeep was there to give me a nice breakfast and a few pints of ale for my next trip. She informed me the next stop would be to her fellow dwarves in Khaz Modan. It would bring me one step closer to ensuring I always had a place to drink in the Eastern Kingdoms and a way to supply myself with good ol' dwarven ale wherever I might be in the world of Azeroth. A cold ride through the mountains lead me finally to the tavern at Khaz Modan, just outside Ironforge. It was eerily empty, maybe all the dwarves here had partied too hard the night before and hadn't woken up yet or were just all off doing dwarf shit. Either way, it was my lucky day. More ale for Strongbad. And I had finally completed my quest for the supplier of all the dwarven ale across the Eastern Kingdoms and the supplier of Booty Bay and my very own home, Orgrimmar. With a constant supply secure, I made a stash house of all I could buy and stock piled it below the Tavern I was about to open for business. With my stash made, it was time I opened up a tavern myself for any race in Azeroth looking to let loose, dance hard, and be themselves. Strongbad's Tavern and Brothel was officially open for business in the park of Stormwind.

Feel free to stop by when I am serving drinks for half off lap dances from all the ladies and one silver drinks. I will never get bored of the ladies and try hards in Goldshire, but now that I have my own tavern you can expect me to be in Stormwind serving drinks more often. Horo's mother now has a huge inventory of alcohol. So if I am AFK or you are Alliance, always feel free to make my bottom bitch wench serve ya. See ya around the different taverns across Azeroth and my own tavern as well if you feel like stopping in for a pint.


Here's to drinking with ya'll soon.

Re: Strongbad's Alcohol Adventures - The Quest for Dwarven Ale - A Pub Crawl Sto